The perovskite family of materials holds out a hope for “dirt cheap” electricity. Why? As a result of their cooperation with American partners, this question is answered by Csaba Janáky, assistant professor of the SZTE, and his student and doctoral candidate, Gergely Samu, in the 4 articles published in the technical journal of the American Chemical Society within 7 months’ time.

The MTA-SZTE Momentum Photoelectrochemical Research Team contributes significantly to the process of solar cell research. Using methods in their profile, they have studied a previously ignored set of materials, the perovskites. The crystal compositions discovered by the Russian Lev Perovsky have been known since the 1940’s, but researchers only discovered their optical activity around 2010.

“In ordinary solar cells the active material, silicon is a few hundred micrometres thick but in the case of perovskite this is only a few hundred nanometres. This means that a thousand times thinner layer of perovskite is sufficient to absorb the same amount of light as the materials previously used in silicon solar cells”- the head of the research team explains the practical advantage of this newly discovered quality. Csaba Janáky, associate professor of the Department of Physical Chemistry and Materials Science at the Faculty of Natural Sciences and Informatics of the University of Szeged and his team are working on finding the answer to the question: “Why”.

The common feature of perovskite compounds is that they consist of three elements and their crystal structure has the formula: “ABX3”. Researchers in Szeged have studied four types of materials, including caesium-lead-bromide compounds. The photo-physical and electrochemical properties of these perovskites, as well as the various interfacing phenomena have been examined.

“One of our American partners, a University of Notre Dame researcher, Prashant V. Kamat, who visited Szeged in the spring of 2017, has been studying perovskite compounds since 2013-2014.

We started a joint project with them and my doctoral candidate, Gergely Samu, who has a considerable knowledge of electrochemistry and photo-electrochemistry, travelled to America in curious pursuit of the practical knowledge gathered there.”

After gaining exclusive insight into American research practices about perovskites, Gergely Samu worked on his experiments for 12-16 hours a day, then master and student evaluated his results at home and decided on the best step to continue. In August 2017 Csaba Janáky visited the University of Notre Dame too, where he held an institute seminar. The research topic expanded as a result of inspirational discussions both at home and abroad. The interpretation of the large set of data obtained from persistent experimentation resulted in 4 articles within 7 months.

“There is great debate around the perovskites in the scientific community. These materials are very promising, they have very good absorbent properties and electrical qualities, but their stability is questionable. In many cases, we do not even understand the cause. This is why our research, which is trying to highlight elemental processes, is so important. We study what happens when the perovskites come into contact with light or water or oxygen. If we understand these, we will be able to control these processes,” - Csaba Janáky explains the importance of their article published in the 2017 July issue of ACS Energy Letters. 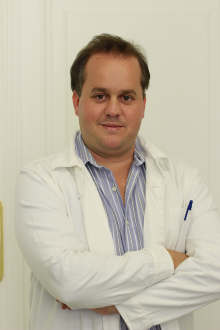 Methodical articles are rarely published in professional journals, although they would serve a broad community. It is for this reason, that their article published in the new journal “Chemistry of Materials”, which describes the electrochemistry and spectro-electrochemistry of the perovskite layers in material science, is so special. The Journal of the American Chemical Society, also known as JACS, adopted their essay about the regulation of charging dynamics in perovskite films with electrochemical methods on the 13th November, 2017. In this JACS essay, they investigated how light affects electrons moving from the electron-hole pairs onto the electron conducting layer. In the fourth publication they discussed the other half-cycle of the migration of charge carriers and answered the question of how positive- charged holes migrate to the hole-conducting layer. The author team of these 4 articles about perovskites is the same: in addition to the two Szeged researchers, it includes an American professor, who is among the hundred most quoted chemists in the world, and his Ph.D. student.

“The device suitable for ultrasonic examination of these easily decomposable materials can be found in Prashant V. Kamat's laboratory, but we do not yet have this laser technique,” Csaba Janáky says. “However, in the laboratory of the ELI-ALPS research institute, new opportunities open up that enable Gergely Samu to continue his work previously started in the MTA-SZTE research team, also as a staff member of the “Szeged Super Laser Centre” in January 2018, focusing on the perovskites. 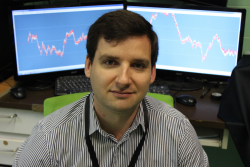 Research scientist Antal Berényi and chemist Csaba Janáky, two successful young scientists of the University of Szeged examine the possibilities for ultra-fast electrochemical detection of neuronal cell activity - moving on the boundary of nerve and material sciences. The research is part of the EFOP-3.6.1 application.