László Stachó's scientific interests and work are diverse. Among other things, early in his research career, he studied the extensions of Federer's curvature measures and minimax theorems. However, his entire work is dominated by the study of Banach manifolds and related algebraic structures.

His most significant discovery is the so-called projection principle which was published in our Acta. This result gained great importance in the study of the biholomorphic automorphism group of Banach manifolds, which is closely related to the classification problem of symmetric domains in Banach spaces (which aims to extend Cartan's famous 1935 result from the finite-dimensional case to infinite dimension). In particular, his result played a significant role in the nonlinear extension of the classical operator theoretical bidualization, with which it was possible to verify that the study of biholomorphic automorphisms of bounded symmetric domains in Banach spaces and the study of certain algebraic structures, the so-called JB*-triples, are equivalent problems, and concerning these latter structures, bidualization led to a new nonlinear generalization of the Gelfand-Naimark theorem. 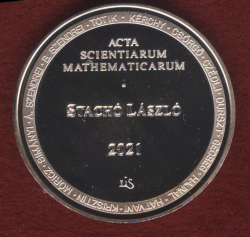 László Stachó published high-impact papers in Acta Sci. Math. (Szeged) on each of the three topics mentioned above. The total number of his papers in the journal is 14.

The official award ceremony will be held at 10:00 am on 3 June 2022 (Friday) in Bolyai Hall of the Bolyai Institute.

On this occasion he will deliver a lecture on “Holomorphic isometries and related problems” in Hungarian.