The University of Szeged and the Fulbright Commission Renewed Their Cooperation

The Fulbright Exchange Program, covering more than 160 countries around the world, not only offers scholarships to study, conduct research and teach but also provides a unique opportunity which has a decisive influence on the life of scholars.

‘Hungary has been participating in the scholarship program provided by the US-based organization since 1978. As a result, since 1981, 45 people travelled to the United States from Hungary, also on the basis of reciprocity 51 people arrived to Hungary from the United States for pursuing their studies, teaching, or conducting research at the University of Szeged’ said Prof. Dr. Márta Széll, SZTE Vice-Rector for Strategic Affairs. She emphasized that as a host institution, the University of Szeged strives to raise the awareness of young people, educators and researchers from overseas that the University of Szeged is one of the most advanced and modern higher education centers in Hungary and in Europe. 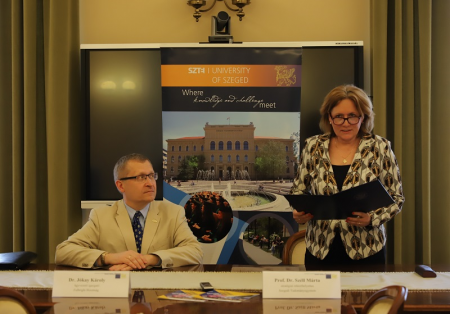 Dr. Károly Jókay, Executive Director of the Fulbright Committee, said that the cooperation agreement has a diplomatic value, as teachers and students from universities that receive US scholars tend to apply more for scholarships. He added that besides the Hungarian and American states, Hungarian universities and research institutes are taking part in the program by providing housing and financial support for people from America.

Following the signing of the agreement, Dr. Károly Jókay delivered an informative lecture in the central building of the University of Szeged to students and teachers interested in learning and conducting research in America, as the deadline for submitting Fulbright applications for Hungarians is approaching: 10th of May 2019 for students, 10th of October 2019 for teachers and researchers.

The Fulbright Program, initiated by Senator J. William Fulbright in 1946, has been the most well-known educational and learning exchange program in the United States ever since. The program is open to graduates and undergraduates from any study field, or to a PhD / DLA diploma holders who also have an appropriate level of English language proficiency.