SZTE Was Recognized on an International Ranking Again

On the U-Multirank ranking that is supported by the European Union, the University of Szeged was again marked with an excellent ranking. The international ranking ranked higher education institutions in 96 countries, including 15 Hungarian universities by more than 30 indicators. SZTE was ranked the best in the field of knowledge transfer.

In the 2019 ranking, 1711 higher education institutions from 96 countries were ranked, among others in Sweden, Japan, Russia, Portugal, and Namibia, Malaysia and Iran. 15 Hungarian universities participated in U-Multirank, including the University of Szeged. 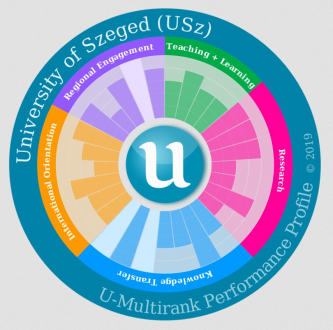 As for regional engagement, it can be clearly demonstrated that the proportion of students being employed in the region as SZTE- graduates is high. The survey also shows that the University of Szeged performed outstandingly well also in terms of joint publications with industrial partners in the region.

The international U-Multirank ranking has also rated the University of Szeged in several disciplines, including Biology, Chemistry, Information Technology and Mathematics. The institution has performed outstandingly in many areas. Detailed results are available here.